One of the undisputed things about Australia is that we have the cutest native animals in the world. If you have children in tow, a trip to the zoo to see animals such as kangaroos, koalas and platypuses (as well as some exotic imports) is a time-honoured tradition. You can also get up close to these curious creatures in the wild.

Visitors to Australian Reptile Park located on the Central Coast, near Sydney, might be surprised to learn they can watch funnel-web spiders being milked for life-saving anti-venom. You'll also meet Elvis the saltwater crocodile. Nearby is Australia Walkabout Wildlife Park, where rangers lead encounters with native animals and you can stay overnight in self-contained cabins. A visit to Port Macquarie Koala Hospital helps to save this vulnerable species.

You can go behind the scenes and see rare white lions, rhinos and other exotic animals as well as native kangaroos and goannas at Altina Wildlife Park. The park is near the Murrumbidgee River, a popular spot for fishing and canoeing. Meet the friendly meerkats, feed a tiger and pat a rhino at Mogo Wildlife Park on the South Coast.

And while many of the country’s zoos are worth a day’s visit, there are also overnight options. See animals at dawn at Taronga Western Plains Zoo in Dubbo, and enjoy a truly wild stay in the self-contained Savannah Cabins. There’s also the Zoofari Lodge and Billabong Camp, where you can observe nocturnal activities in the friendly native wildlife section.

Whales migrate along the NSW coast between May and November and you can spot them from prominent headlands, which make great vantage points. There are also whale-watching cruises that operate from Byron Bay and Port Macquarie on the North Coast through to Jervis Bay and Eden on the South Coast.

Dolphin-watching cruises are available year-round in Port Macquarie, Jervis Bay and Port Stephens where you will also find the first wild dolphin swim of its kind in the world (from October to February). The Solitary Islands Marine Park near Coffs Harbour and Cook Island Aquatic Reserve in the Tweed are great for snorkelling and diving. Children will be delighted by the little penguins and seals at Montague Island, 9km off Narooma on the South Coast. 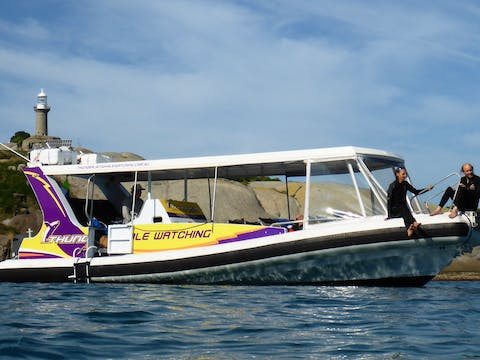 Snorkelling with Seals Adventure, with a professional Snorkelling Vessel and Crew. They Supply Full Length Wetsuits and… Located on the Central Coast of New South Wales, approximately one hour north of Sydney and one hour south of Newcastle,… Wake up in the wild at Billabong Camp in Dubbo, Taronga Western Plains Zoo's overnight camping experience, where you will… This outstanding Wildlife Park has unique personalised Zoo-fari tours like no other. Australia Walkabout Wildlife Park was Heritage Listed to preserve its Aboriginal Heritage in 2019.