Holidays on The Water

With its endless surf breaks, vast lakes and plenty opportunities for aquatic activities such as kayaking, stand-up paddle boarding and sailing, a family holiday on the water in NSW offers up a wide range of options. Start by exploring its many picturesque marine parks, where you can see everything from dolphins and whales to turtles, seals and colourful fish.

You will want to be near the coastline from May to November, which is when whales migrate along the NSW coast. The best way to see the giant mammals skirting along the coastline is on a whale-watching cruise; step onboard a boat at Jervis Bay, Narooma and Eden on the South Coast and Port Stephens, Port Macquarie, Coffs Harbour and Byron Bay on the North Coast.

You can also spot pods of dolphins on a cruise in Port Stephens-Great Lakes Marine Park or go swimming with dolphins in crystal-clear waters with Dolphin Swim Australia. Jervis Bay Marine Park is a great spot to see pods of playful dolphins while on a tour with Dolphin Watch Cruises or Jervis Bay Wild on the NSW South Coast.

To see dolphins and turtles up close, head to Cape Byron Marine Park, a dreamy destination to go kayaking with Cape Byron Kayaks and Go Sea Kayak Byron Bay. If you want to see seals, Montague Island, off the coast of Narooma in Batemans Marine Park on the NSW South Coast is the best spot to go snorkelling with these majestic marine creatures.

The whole family can don a snorkel and mask and older kids can sign up for scuba diving at the Solitary Islands Marine Park, near Coffs Harbour, which is great for both snorkelling and diving. The Jetty Dive Centre has scuba courses for kids aged eight to 12 with half a day in the pool and classroom and half a day diving in the pristine marine park environment.

You'll find plenty of things to do at stunning beaches along the coast, from swimming to surfing and stand-up paddle boarding to quiet moments building sandcastles or leaving footprints in the sand. The South Coast is perfect for beginners to learn to surf, with surf schools at beaches in the Illawarra, Shoalhaven and Eurobodalla.

The Central Coast is a great spot for families, just 90min from Sydney and with beachside holiday parks in Budgewoi, Canton Beach, Norah Head and Toowoon Bay. Further north, families will love the quiet beaches of the Macleay Valley Coast, Coffs Coast and Tweed regions. Don’t want to get sand in your swimmers? Then try one of NSW’s beautiful ocean pools.

The rivers and lakes in NSW are also worth exploring: hire a houseboat and cruise along the Murray River for a memorable adventure through the countryside. Visit the Great Lakes region near Forster to explore three coastal lakes or paddle across the largest saltwater lake in the Southern Hemisphere at Lake Macquarie. The waterways around the Snowy Mountains also make an excellent spot for fishing in spring and summer.

Holidays on the Water Highlights Have you ever wanted to experience the mighty Murray River on board a houseboat? Well Executive houseboats have a luxury… 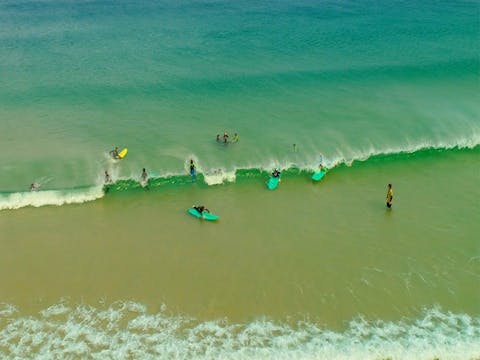 Established twenty years ago at Seven Mile Beach, the Land's Edge Surf School is one of the best surf schools on the… Coffs Harbour is the southern gateway to the Solitary Islands Marine Park, a very unique mix of tropical and temperate… Jervis Bay is renowned for its natural beauty and extraordinary wildlife, such as dolphins, seals, sea birds, fairy…

Enjoy These Aquatic Adventures in NSW