Surrounded by ocean, lakes and rivers, Narooma is a rhapsody in blue. It’s a place to dive deep with seals, paddle along glassy bays and pluck oysters from the shallows. And while it’s long been famous for its captivating natural wonders, this coastal community is fast becoming the South Coast’s most fashionable foodie destination.

Narooma has had a recent flush of delicious new places to eat, as Justin Hemmes, CEO of the Merivale group, made the pretty seaside town his second home. A takeover of The Quarterdeck, a seafood restaurant and bar perched over the water on the Wagonga Inlet, has preserved its sense of coastal cool while offering a new menu that embraces spectacular local seafood (think snapper ceviche and whiting tacos) and colourful Tiki-inspired cocktails. Next door, The Inlet serves fish and chips with outdoor tables and sunset views. And The Whale Inn, a small hotel in the centre of town, is now home to an outpost of Sydney restaurant Queen Chow, serving Cantonese classics and new dishes inspired by local produce like Wagonga oysters. In early 2022, Hemmes purchased his fourth venue, the bright blue Lynch’s Hotel. Dating back to 1903, it’s a classic Aussie pub and one of the oldest buildings in town – there are plans to renovate it in the future.

Narooma is at the heart of the Oyster Coast and there are many places to taste these delicacies freshly shucked. Run by the Coxon family, who have been farming oysters for more than 40 years, The Oyster Farmer’s Daughter is set right on the edge of the Wagonga Inlet, and serves some of the freshest Sydney rock oysters, fish and chips, cold pressed juices, and cocktails. The stunning river views will encourage you to linger all afternoon.

For café-cool right by the water, Salt is all about simplicity, highlighting seasonal ingredients in nourishing veggie bowls, grazing boards and other cafe favourites. In the middle of the main shopping strip, Raven Cafe & Grill serves up breakfast, burgers, salads and good coffee.

Driving over the bridge into Narooma, you’ll be seduced by the sparkling turquoise waters of the Wagonga Inlet. It is incredibly photogenic, with gliding pelicans, colourful kayakers, boats bobbing at anchor, oyster sheds and the Mill Bay Boardwalk on the northern side (look out for stingrays feeding in the shallow waters below). Step aboard the 117-year-old Wagonga Princess ferry for a gentle cruise around the picturesque waters.

Along the Narooma coastline runs a necklace of breathtaking beaches. Catch a wave at Narooma Surf Beach or sit back on the sand and admire the ancient rock formations of Glasshouse Rocks and Pillow Lava. Bar Beach South, on the ocean side of the Wagonga Inlet, is an ideal spot for snorkelling and diving, with the calm enclosed waters home to schools of fish, squid and jellyfish. On the southern side of town, Handkerchief Beach is known for powerful surf, which runs between Nangudga/Handkerchief Lake and the sea.

A snorkelling tour with the seals of Montague Island, Narooma

Just 9km offshore from Narooma is the spectacular Montague Island. It has long been sacred to the local Yuin Aboriginal people, who call it Barunguba, and today it is one of the South Coast’s most remarkable wildlife wonderlands. Take a tour with Montague Island Adventures to visit colonies of little penguins, spot more than 90 species of seabirds, look for dolphins and whales, or snorkel with the island’s colony of playful seals. Walk to the historic lighthouse, built in 1888, for incredible views of the South Coast.

A snorkelling tour with the seals of Montague Island

Southbound Escapes also offers cruises to Montague Island, as well as guided walks and e-bike tours, kayaking adventures and Indigenous cultural experiences. There’s plenty to explore on land as well, like the Narooma to Dalmeny cycling route, which winds its way along the magnificent shoreline. For a tee off with a view, pack your clubs (or hire some from the pro shop) and play a round at the scenic Narooma Golf Club, set right on the edge of the water.

The Whale Inn sits on a hill in the centre of Narooma, making for uninterrupted views out over the coast. It has 17 spacious rooms – many with kitchenettes and separate living areas – plus a swimming pool, outdoor area with barbecues, and on-site Queen Chow restaurant.

Amooran Oceanside has stylish self-contained apartments and motel rooms with views over the ocean and Narooma Golf Course. There’s an outdoor pool and spacious landscaped grounds, and it’s just a short stroll to cafes and restaurants. For something unique, spend the night in one of the two beautifully restored 19th century lighthouse keeper’s cottages on Montague Island. With no other overnight guests, you’ll experience the beauty of the island in silence and solitude.

Narooma sits at the southern end of Eurobodalla, a dazzling region that encompasses rugged coastline and lush mountains, laid-back seaside villages and historic hinterland towns. Take a road trip north along the coast, stopping off to explore riverside Moruya, surf at the beaches of Broulee and Malua Bay, and indulge in some family-friendly fun in Batemans Bay. Inland, Bodalla is famous for its dairy industry – admire the cows grazing in impossibly green fields then order a scoop of ice cream childhood dreams are made of at Bodalla Dairy.

To the south are the twin villages of Tilba Tilba and Central Tilba, both as cute as they come. Classified by the National Trust, their streets are lined with historic cottages, cosy cafes and pretty gardens. Stop in for a tasting at ABC Cheese Factory or lunch at 130-year-old Dromedary Hotel, then check in to a charming cottage at The Bryn. Cross over into the Sapphire Coast, NSW’s southernmost coastal pocket, for more jaw-dropping vistas and wildlife encounters. Mimosa Wines, tucked into the cool hinterland forest between Tathra and Bermagui, is the perfect place to toast your adventures.

The drive from Sydney to Narooma takes five hours and from Canberra, it’s three hours. You can also fly from Sydney to Moruya Airport and rent a car to make the 45-minute drive south. Moruya Airport is 5km from Moruya’s town centre. Use the taxi services at the airport to make the short trip southwest. Alternatively, rent a car from the hire services available at the airport and explore the Eurobodalla region at your own pace. How to get there: Charter boats go out to the island from Narooma regularly. Surf Beach, Narooma has two amazing sites of ancient geological significance and beauty at either end of the sandy beach. … 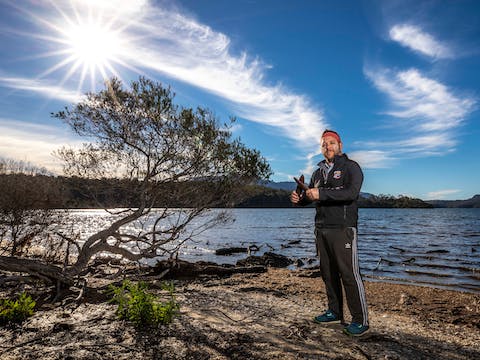