Nature dials up the drama along the Kiama coastline on the NSW South Coast, a rugged landscape carved by ancient volcanic lava flows and vents some 260 million years ago. Perhaps the most showy of all is the Kiama Blowhole, where waves thrashing against rocks below enter a sea-cliff cavern, periodically compressing air and spurting water 30 metres into the sky with an almighty ‘woosh’.

Depending on ocean swells and vantage point – multiple viewing platforms are available – you’ll likely feel the salty spray on your cheeks (there have been drenchings!). The best times to view is when there is a south-east swell.  It’s a spectacle to see – both invigorating and breathtaking.

This ‘big’ attraction gives the entire headland its name, with Blowhole Point now the site of a number of other diversions. The water spray here is not guaranteed, as it depends on the surge of the sea. While waiting for nature’s fountain, why not enjoy a picnic under the soaring Norfolk pines that adorn the cliffs or have a nice spot of lunch at Diggies at Blowhole Point.

Or seize photo opportunities beside whitewashed Kiama Lighthouse, dating back to 1887. Also, on the headland lies heritage-listed Pilot’s Cottage Museum, offering fascinating insights into Kiama’s maritime history. Then cool off with a dip in the Blowhole Point Ocean Pool, carved right into the rock on the north side of Blowhole Point.

The blowhole is one attraction of many on the 20 km Kiama Coast Walk; a cliff-hugging route taking in more geological wonders, plus bird-rich wetlands and long stretches of sand. The route is divided into three sections – the Big Blowhole marks the start of the mid-section. Follow the track north, and you’ll discover Cathedral Rocks and the basalt columns of the Bombo Headland; venture south, and you’ll pass pretty beaches and the Little Blowhole, which, while not as lofty, is much more consistent in its performance.

Around the Kiama area

Come for the blowholes and linger for Kiama’s laid-back charm. A two-hour drive south of Sydney, along the jaw-dropping Grand Pacific Drive, Kiama is the quintessential Australian seaside town: think surf beaches, calm bays for swimming, whales and dolphins, and cafes and restaurants that reflect the surrounds. And don’t miss the festivals and events, from farmers’ markets to culinary workshops. Located on Blowhole Point, the Kiama Lighthouse is hard to miss. Established in 1887, 10 years after the creation of the… Another of nature's particularly special skills, the Little Blowhole is a little bit hard to find but well worth the effort… Step into Kiama's past and discover the maritime and regional museum. Built in 1881, the restored Pilot's Cottage provides… 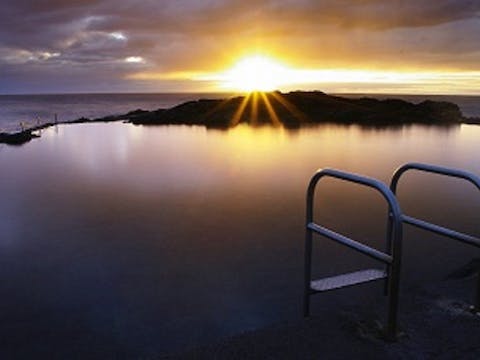 There are two beautiful ocean pools in Kiama and this one is the smaller of the two sitting on the edge of the ocean. It is…