Country NSW offers the perfect outdoor escape for nature enthusiasts. Be it a gentle hike in the woods, canyoning down a spectacular rock face, kayaking along rivers through deep forests or walking hidden nature trails, there’s something for every outdoor adventurer, no matter your skill level.

There are more than 70 spectacular national parks and reserves throughout Country NSW. Many of them make up the ancient Gondwana Rainforests of Australia, the most extensive area of subtropical rainforest in the world. You can explore spectacular scenery, untouched wilderness and cascading waterfalls in parks like:

Against a superb backdrop of World-Heritage wilderness, take your pick of pursuits such as relaxing in thermal spas or picnicking in a grove of gum trees. Follow The Murray as it winds past historic towns and wetland sanctuaries lined with river red gums, then find a little feet-up spot for fishing or drift downriver on a paddle steamer.

Fresh, clean air and a lack of artificial light makes the Warrumbungle National Park a world-leading spot for stargazing. Located in the northwest of NSW, this park is home to Australia's largest optical telescope and is Australia's only Dark Sky Park, the first of its kind in the southern hemisphere.

The historic port of Wentworth marks the meeting of the Murray and Darling rivers, near World Heritage-listed Mungo National Park. The world’s oldest ritual cremation site was found in Mungo along with Australia's largest collection of fossilised human footprints and the largest set of Ice Age footprints in the world.

Join an indigenous tour of the Sandstone Caves in Pilliga National Park to visit ancient rock engravings of the local Aboriginal people and learn about their connection to the landscape. Walk in ancient footsteps with Bundyi Cultural Tours in Wagga and admire modern indigenous art along the Yindyamarra Sculpture Walk in Albury. 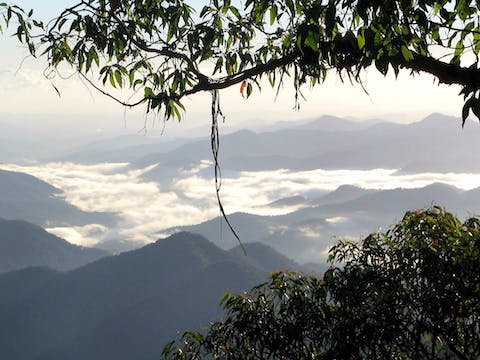 Eagles Nest walking track takes you on a journey though World Heritage rainforest and snow gum forest, with outstanding… Warrumbungle National Park near Coonabarabran in NSW is a great place for camping, walking, birdwatching and, as Australia…

Getting to Country NSW