The best places in NSW to stare at the night sky

Be inspired and humbled by a blanket of stars at these incredible dark-sky locations.

The night sky is a kaleidoscope, a whirling mass of colour and wonder. It is a time machine, a look back into history as light produced millions of years ago just now hits our eyes.

And in NSW, there are plenty of spots (including special Dark Sky reserves) where you can see jaw-dropping night-sky views.

Travel 5km out from Broken Hill, in the state’s far west, and it would be something of an understatement to say you won’t see many lights. That’s a good thing, of course, because it means at Outback Astronomy you get to see an incredible array of stars shining in an exceptionally dark sky.

Here, you’ll be able to recline in a purpose-built stargazing dome, get comfy under a blanket and follow expert guides as they take you through the highlights, pointing out the galaxies, constellations and notable stars that would otherwise just blend into the magnificence above.

The Warrumbungle region is home to Australia’s first Dark Sky Park – centred in the eponymous national park – and you’ll find multiple amazing stargazing experiences on offer. At Siding Spring Observatory, discover Australia’s largest optical telescopes; join Donna the Astronomer at Milroy Observatory, just outside Coonabarabran; or simply set up your own telescope in one of Warrumbungle’s campsites. As the universe reveals itself above you, you won’t be disappointed.

It will come as no surprise to discover that the Blue Mountains, just west of Sydney, is a perfect place to stare at the heavens. This is nature at its finest, with few lights and little outside distraction to disrupt your observations.

At Wentworth Falls Lookout, astronomer Dr Dimitri Douchin hosts Blue Mountains Stargazing, a tour of the night sky (with the help of a computerised telescope) that takes place either 30min after sunset or a little later in the evening to appreciate the universe’s full display. These tours are suitable for ages four and up, and provide a fascinating insight into the galaxies and constellations that twinkle above.

Great news: you don’t even have to leave the confines of Sydney to enjoy an eye-opening stargazing adventure. Occupying a heritage-listed sandstone building in The Rocks, on the appropriately named Observatory Hill, Sydney Observatory has played a pivotal role in Australia’s astronomical history, and continues to offer memorable experiences to visitors.

Set to reopen mid-2022 after undergoing heritage maintenance works, there are both day and night tours here. During the day, use the telescope to view the sun, the moon and even Venus; at night, let expert guides lead you through the basics of celestial navigation, while also viewing some of the dark-sky highlights through the telescope.

Hidden away in the hills outside Mudgee in the state’s central west, in a spot with very little light pollution, Mudgee Observatory is a private institution that accepts visitors on group tours or those simply interested in better appreciating the wonder that lies above.

Astronomer and owner John Vetter guides visitors through the visible constellations – which are seasonal – via four telescope domes that provide incredible views out into space, where something that once seemed black-and-white is suddenly visible in colour as you zoom in close to planets and stars. There’s also a theatre and planetarium here, and the observatory offers daytime sessions to view the sun.

Few observatories in the world can claim the historical significance that Parkes enjoys. Communications from the Apollo 11 moon landing were received and relayed here, while cult film The Dish, whose story is based on those events, was also set and shot here.

Visit the Parkes Observatory and of course you’ll get to see that dish – the 64m wide antenna operates 24 hours a day and is still used, among other things, to detect signs of alien life. You’ll also have a chance to explore the interactive displays and the 3D theatre on site. This isn’t so much a stargazing experience as such, but it’s still the perfect outing for anyone fascinated by astronomy. 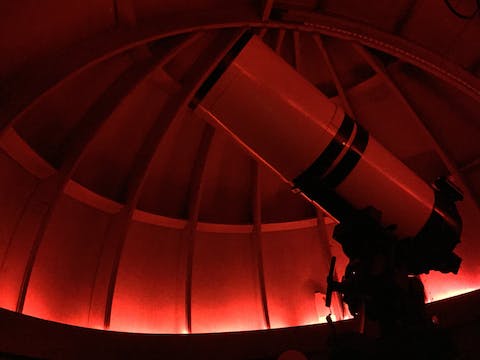 Port Macquarie Astronomical Observatory is situated above Town Beach in Rotary Park. It's a great place to visit for… At the Dubbo Observatory you can view the planets, stars and galaxies through telescopes at night including our new large… Skywatch Observatory is a large mud brick building with local timber features, set up for you to have privacy and comfort… Where to discover the creative soul of Broken Hill