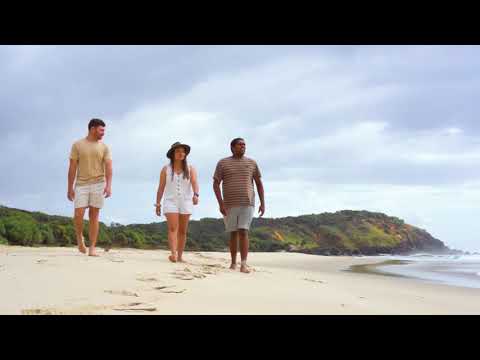 In the mythology of Bundjalung Nation, the Dirawong (a goanna) is the Creator Being that taught the people various aspects of Aboriginal cultural and customs. Goanna Headland, at Evans Head (one of…

In the mythology of Bundjalung Nation, the Dirawong (a goanna) is the Creator Being that taught the people various aspects of Aboriginal cultural and customs. Goanna Headland, at Evans Head (one of the most easterly points on mainland Australia and the town where Queen Elizabeth II flew into during her Royal visit to Australia in 1954), is believed to be the body of the mythical Dirawong.

Dirawong Reserve, also known as Goanna Headland, has been the mythological place of origin of the Bundjalung Nation for thousands of years. The Australian Aboriginal tribal groups of the Bundjalung Nation call it "The Dirawong". Within its landscape are many sacred, secret and ceremonial sites. To date some 24 archaeological sites have been located on Goanna Headland to the south of Evans Head Village.

The Dirawong Reserve walking trail takes you across the headland and around the breathtaking coastline, winding back through the coastal heaths. Download the walking trail brochure and plan your journey.