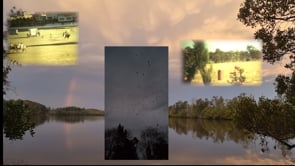 Pre-Socratic philosophers theorised that the human’s ability to see was due to “the fire that comes from the eye”, an idea that eyes emit visual fire streams that, when combined with daylight, enable a person to visualise their environment.

Newcastle-based artist Michelle Gearin has created expressive and deeply personal works in her solo exhibition Double Rainbow, which respond to the power of the human eye and the science of optics.

As an autistic artist Gearin’s newly commissioned work reflects the complexity of the eyes as a major component of the artist’s relationship with the world around her.

Pushing her practice into new experimental mediums, including installation, video and sound, Gearin’s work explores the primal human experience of connection and communication through eye contact and the behavioural properties of perceived light.

Her work explores the meteorological phenomenon caused by the reflection, refraction, and dispersion of light within water droplets, known as a rainbow.

Occasionally, light reflects through these droplets twice creating a second arc of reversed colours. For Gearin, this reflected universe symbolises the way she lives in the world and takes in and processes stimuli.

Have a step free main entrance to the building and/or reception area (includes ramps or slopes with a maximum gradient of 1:14, otherwise are too steep for wheelchairs)
Have a wheelchair accessible toilet / shower and change room
Have accessibility information and photos, including of a bathroom, room and/or floor plan on your website (can be emailed on request)
Have at least one wheelchair accessible parking space with wheelchair accessible signage clearly displayed (International standards are 3200mm wide x 2500 mm high)
Have grab rails in the bathroom
Have step free outdoor pathways (includes picnic areas, barbecues and shelters)
Offer a range of contact methods for receiving complaints
Offer multiple options for booking - web, email, phone
Use Plain English / easy read signage and information (includes menus and emergency information)
Welcomes and assists people who have challenges with learning, communication, understanding and behaviour. (includes people with autism, intellectual disability, Down syndrome, acquired brain injury (ABI), dyslexia and dementia)
Read more Read less Read more
Website Call Email